Play the very best courses along with Wild Atlantic Way while also staying in the finest 5* accommodation the South West has to offer.

Feedback is all positive… Great golf courses, great lodging, great bus driver, great aprés golf and most importantly a great bunch of guys to hang out with. An awesome experience!!

Top notch all around…good hotels, good golf. Nothing from a coordinating standpoint that was missed.

I thought all the courses were magnificent and in great shape. The tees times seemed very organized. By this I mean we were expected, welcomed, tee times ran on time and fitted into busy member play. Caddies were overall good. The one I remember most was Jackie – a 13-year-old boy at Dooks. Accommodations were within walking distance of town centre. The quality of the tour bus exceeded expectations. It was very nice. Our guide made it even better and did a terrific job. 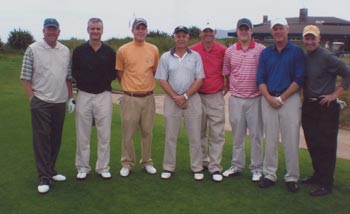 We all had an incredible time in Ireland. SWING has been and will continue to be our go-to agency for any golf tour to Ireland.

Et everyone enjoyed the trip to SW Ireland.

This group photo was taken on the last day at Tralee, which our group voted as the #1 course we played.  Old Head and Ballybunion were very close at #2 and #3. It would have been fine to play any one of those links courses more than once!! I personally REALLY liked Tralee…the course is spectacular and extremely interesting.

You put together a great trip for us.  The bus and driver, Eddie Horgan, were excellent.  The hotel was very good, everyone liked Killarney, and the courses were great.

County Clare, homeplace of The Burren, is one of the most visited counties in Ireland. Local attractions and potential day trips include the ever-impressive Cliffs of Moher, the Aillwee Caves, Bunratty Castle and the historic Aran Islands.

Other amenities include horseback riding, hill-walking, caving in the Burren, diving in the Atlantic Ocean, and coastal cycles to name but a few.

The town lies adjacent to the boundary of the National Park on its north-eastern edge. Its name comes from “Chill Airne”, meaning “church of the sloe”, the original site of which is thought to be the location of the present-day St. Mary’s Church of Ireland. The spectacular scenery of the area, particularly the lakes has been the basis of a tourism industry that has been operating in Killarney for at least 200 years.

The most impressive building in the town is the Cathedral, which was designed by Pugin and finally completed in the 1920’s after some eighty years of construction work.

Other popular attractions in the area would be Muckross House is a magnificent Victorian mansion completed in 1843 located close to the eastern shore of Muckross Lake and set beneath the impressive backdrop of Torc and Mangerton Mountains. The Garden’s surrounding the House are famed for their beauty and can be visited at any time.

Close to the House is the Muckross Traditional Farm, a working farm project that has recreated the Irish rural life of the 1930’s, prior to electrification. Another top attraction in the town would be Ross Castle, a restored 15th Century Castle, located on the banks of the Lower Lake. From here you can take a boat tour of the lakes which gives you a unique view of lakeshore and the islands.

The prime attraction for sightseeing in the region is the world renowned Ring of Kerry, with Killarney regarded as the ideal starting point. The Ring is a 79-km-long circular tourist route that you are best to travel clockwise from Killarney. It follows the N71 to Kenmare, then the N70 around the Iveragh Peninsula to Killorglin – passing through Sneem, Waterville, Cahersiveen, and Glenbeigh – before returning to Killarney via the N72.

– Valid for 2020 at different rates depending on travel dates. Exchange rates are only approximate and will be subject to change at the time of booking.

– Promotion available through the SWING office only
– All courses must be booked to avail of the rate
– Based on Twin/Double Sharing inc. full Irish breakfast – price based on Classic Links Rooms at Doonbeg
– All courses and hotels are subject to availability at the time of booking.  Terms & conditions apply

Other courses, accommodations & services (e.g. transport) can be added to the above on request 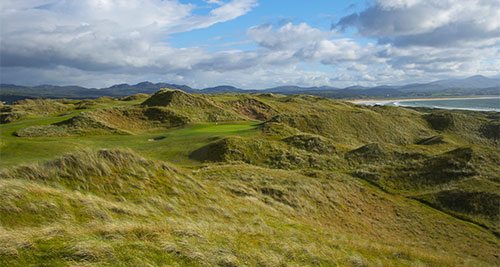