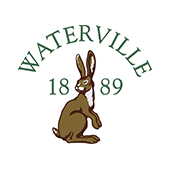 One of the oldest Irish clubs, rated among the top 5 in Ireland and the top 20 links courses in the world, Waterville’s links course is highly acclaimed, both nationally and internationally, and by a host of some of the world’s leading professionals.

From Faldo and Floyd to Stewart, O’Meara, and Woods, players of all levels cannot help but be impressed by the quality of this course and the challenges it brings.

A combination of sand dunes, gorse, and native grasses, from teeing ground to putting green this 18-hole course reflects the rugged charm of the Irish West.

The pinnacle of the course, literally and figuratively, is Hole 17 or Mulcahy’s Peak. This is the highest point golfers will climb to and one that offers a breathtaking bird’s-eye view of the surrounding landscape with the Macgillycuddy’s Reeks, the highest mountain range in Ireland, to the north and east.

The revamped clubhouse offers excellent locker facilities, a golf shop that can be perused online and in person, and a golf school for those golfers who feel they need to work on their game. Scattered with an ample collection of old photographs, golfers can delve deep into the course’s past.

The restaurant and bar serve fresh seafood and traditional Irish fare complemented by welcoming turf fires and panoramic views of the course, further enhanced by the cultural mixing of overseas visitors and local members.

The 18th century Georgian Manor House that sits on a narrow isthmus facing the wild Atlantic Ocean with beautiful Lough Currane on its eastern perimeter. The Currane River bisects the 50-acre estate as it flows into Ballinskelligs Bay. The Manor was built by the Butler family in 1790 and the estate was called “Waterville”.

Aside from the four-star residences comfort and charm, the 12 bedroom establishment has a private, Fazio designed, practice facility. Guests enjoy preferential tee times and access to fishing in the famous Butler’s Pool, private rivers and lakes. The ancient Weir of Butler’s Pool is listed in the book, Iveragh Peninsula Archaeology, and is part of Ireland’s Salmon Research program, supplying critical spawning migration data.

Alternative options in the area include the 4* Butler Arms Hotel or Brookhaven Guest House.

Where to Eat and Drink

Waterville sits on the Ring of Kerry, a 179 kilometer-long circular tourist route that connects the village to Killarney, Kenmare, Sneem, Glenbeigh, Killorglin, Cahersiveen, and Caherdaniel.

Notable locations in the area include Valentia Island, Staigue stone fort, and Derrynane House, home of the famous Irish national figurehead Daniel O’Connell. Killarney National Park is an area of outstanding natural beauty that is popular among hikers and casual walkers alike. Areas to be discovered within include Torc Mountain, Torc Waterfall, Ross Castle and Ladies View.

On the midwest stretch of the Ring of Kerry sits the historic village of Waterville, aptly named for its resplendent views of Ballinskelligs Bay to the west, Lough Currane to the east and the Currane River, which splits the town in half in an effort to join these two vast and serene water bodies.

As the region is steeped in water so too is it steeped in history, one that is reflected in its links course, Waterville village, its local neighborhood, and its vast network of cultural and geographic heritage as connected by the Ring of Kerry. Waterville itself was a favourite holiday destination of Charlie Chaplin who, in times past, could be found in The Butler Arms Hotel.

In commemoration of this link to the world’s most iconic actor of the silent cinema, a statue was erected in the centre of town. The statue serves as a perfect landmark and focal point for the Charlie Chaplin Comedy Film Festival which has been running since 2011 from August 21st-24th.

From film history to the history of telecommunications Waterville has it all. The local area heralded the first transatlantic cable in 1865, connecting Heart’s Content in Newfoundland and Valentia Island to the west of Waterville.

Later, in 1866, the first telegraph link between Europe and North America was established. Waterville was connected to the system, and by proxy America, by 1884.