Donegal Golf Club founded in 1972 is located on the Murvagh peninsula in Donegal Bay 3 miles south of Donegal Town and is known by many as Murvagh. The links is isolated from the outside world by a forest of evergreens washed on one side by the great Atlantic Ocean and by Donegal Bay on the others. It is one of the longest golf courses in Ireland and Europe and it is ideally suited to big hitters of the ball. This is a real challenge not to be missed. 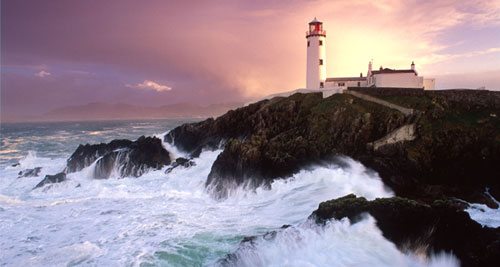 Fanad Lighthouse
In December 1811, the HMS Frigate Saldanha (British Naval Ship) sought shelter from a storm, heading towards Fanad as it frantically fought the raging wind and waves. Sadly, reaching shore safely never happened, and the ship was wrecked off the northern coast with the only survivor being the ship’s parrot.  Soon after, the Fanad Head Lighthouse was built to help guide ships and sailors safely on their journeys. It’s still there today, standing on a rocky outcrop blinking out to sea and is now being developed into a visitors’ centre.

Sliabh Liag (Slieve League) Cliffs
One of the North Coast’s most iconic attractions and Europe’s highest marine cliffs, Sliabh Liag allows visitors to explore countryside that verges on the Atlantic Ocean. Witness outstanding scenic views of imposing mountains, picturesque Islands and beautiful bays along some of the most dramatic landscape in Europe.